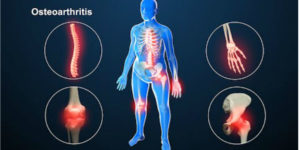 In Respect the Needle in OA (osteoarthritis),  a rheumatologist says:

“… Dealing with osteoarthritis, both patients and their physicians often have a hard time understanding what to make of novel “cures” such as platelet-rich plasma (PRP), stem cell treatments, and so-called prolotherapy.

Although these are typically marketed as halting or reversing joint degeneration in OA, there is virtually no evidence that they actually do. Yet it’s impossible to discount the countless reports from patients that the treatments helped them in terms of pain and function.

The explanation may very well lie in the placebo effect, said Joel Block, MD, a well-known osteoarthritis specialist at Rush University, speaking at the American College of Rheumatology’s 2018 State of the Art Symposium.

But the thrust of Block’s 30-minute talk can be summed up in two words: So what?

The placebo effect is still an effect and a very important one, he argued repeatedly in addressing current knowledge about therapies, largely unregulated, now marketed nationwide in newspapers and online as “disease-modifying.”

It’s “extraordinarily strong” in osteoarthritis, Block said, for reasons that aren’t entirely clear. The experience from randomized trials is that one normally expects a 40% response rate with placebo with large effect sizes. Moreover, the improvements in patient-reported pain do not quickly disappear: the trial data indicates that placebo responses last beyond a year, he said.