The story of Universal Placebos began way back in 2002, as part of a conversation Michael had with some of his students about the way ‘intangibles’ are sold in the knowledge economy. Wouldn’t it be interesting, thought the group, if you were just to ‘fess up that the thing you were selling was actually valueless, in and of itself, and that its value lay in intangibles – that what was being offered was an idea, a thought, an impulse, a vibe …?

What about just going to market with a bottle of ‘placebos’, sugar pills of the kind used extensively in drug trials, harmless but possibly not ‘ineffective’…?

Then, on the 6th of November, 2006, four people (Michael & Ludmila Doneman, Brian & Margi Bruce) had a conversation during a visit to the Bruce’s home in Mullumbimby and the placebo idea came up. Brian, a homeopath, was immediately interested because of the resonance of the placebo idea with the nature and intent of homeopathy and other so-called complementary therapies, the placebo being a refinement and simplification of the metaphysical approach to healing.

So we began to research placebos, and found that the ‘placebo effect’ was widely recognised and accepted by scientists. In other words, it is invariably the case in clinical drug trials, where a proportion of the trial group is given an inert substance – a placebo – that a certain proportion of the control (placebo) group will respond in the same way as the group taking the test drug. This was especially remarkable in trials of the new SSRI designer-psych drugs like Prozac, where up to 70% of the placebo group have reported the same symptomatic responses as those taking SSRI’s.

There is very little dedicated research on how or why the placebo effect actually works, it’s just acknowledged as always being present to some degree. Now, for the first time, the lay person can take advantage of the proven healing qualities of the placebo effect.

We are very interested in the way the placebo phenomenon raises issues about the practices of the gigantic medical-pharmaceutical industrial complex, and the role of non-mainstream and traditional medicines and therapies. 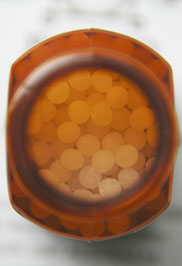 We make no therapeutic claims at all, beyond the assertion that the placebo effect is generally considered to be present, to ‘work’ for at least some of the people some of the time. Placebos are not intended as alternatives to *any* other therapy. Being totally inert, they can do no harm, except perhaps where the ingestion of a tiny amount of sugar might be an issue. If you need an operation, if you need analgaesia, if you need drug therapy for a chronic condition, by all means get the best advice you can and go ahead with it. But consider complementing any such therapy with a placebo, or to be more specific, with the spirit of faith, hope, trust and love which we recommend as part of taking a placebo.

‘Faith, hope, trust and love’ – when did you last see those words on a physician’s prescription?

We also want to hold this lightly, to have fun with it, to enjoy a spirit of playfulness related to the placebo and what it represents. As Australians we love a cheeky sense of humour, and we love taking pot shots at big, self-righteous institutions. In many ways Universal Placebos has succeeded if it brings you a smile.