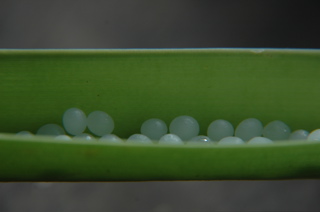 Like most of us at some time or another, you may have had a healthy scepticism  about the use of placebos.

Here is an approach you may like to consider, to help you benefit from the mysterious healing powers of the placebo, even when you know it is a placebo you are taking; an approach that has been useful for a growing number of people in recent times, recommended by a homeopath of some 30 years experience.

The simple mathematics around the mysterious healing powers of the placebo reveals an improvement in at least 30% (and up to 70%) of cases. You can be one of the 30-70%.

Our aim at universal Placebos is to help you shift from curiosity to action –  to dare to try something new.

What would convince you to use a placebo? If you are curious you could try this simple procedure to evoke the positive qualities of Acceptance, Gratitude, Faith, Trust and Action.

With the first pilule focus on acceptance of who you are and where you are, all your advantages and disadvantages, strengths and weaknesses. Accept your true situation, so you are free to respond, and not just react.

As you take the second pilule focus on gratitude. Be thankful for all the positives you have in your life . . . “it could always be worse.” Be mindful of where you want to be. Have faith you will find inner guidance. . . just trust it, that these inner revelations are right and correct.

As you take the third pilule, just say YES . . . it feels better. Smile and go . . .take action with the first step, whatever that is . . . and believe it is possible.

Or, why not create your own ritual? Here are some tips:

(a) Apply KISS tactics (keep it simple sweetheart)
(b) Choose easy times to take placebos, like when you have a cuppa
(c) Take it at least twice a day, morning and night
(d) Be mindful and present in the moment
(e) Keep it short and easy to complete

The ultimate truth is that the successful outcome of any healing situation is determined by the actions and choices and healing system of the individual, regardless of the healing modality. Nobody can make anyone else better, but everyone needs some help sometime.

The truth is that the successful outcome of any healing situation is determined by the actions and choices and healing system of the individual, regardless of the healing modality. Nobody can make anyone else better, but everyone needs some help sometimes. 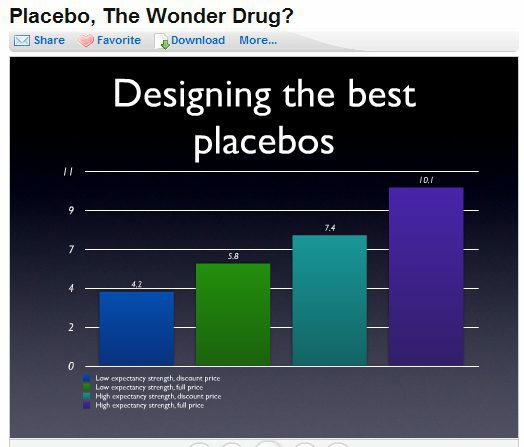 Here’s a web slide show with Mike Campbell and Alan Jones presenting on placebos at the Interesting South Conference, 20th August 2009. They even came up with a consent form allowing a doctor to prescribe placebos as needed …!

According to this article from the ‘OnMedica’ medical website, doctors are being encouraged to consider the “meta-placebo” effect: ‘the healing belief that even fake/placebo treatments have positive effects . . . if both the doctor and the patient believe in the healing powers of the fake treatment, it does not matter that both know the treatment is fake’. No need to wait for medical tests to verify this hypothesis. A growing number have already experienced this effect using our Universal Placebos. See our Testimonials page. 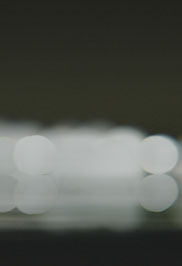 Doctors could steer patients away from unproven alternative therapies if they could use dummy pills, suggests Dutch research.

Oskar van Deventer, a researcher from Leidschendam in the Netherlandspoints out that it is a well established medical fact that fake treatments do work.

If this is the case, he argues, doctors could include placebo pills in their medical armamentarium. But then the doctor might have to lie to the patient and this would present an ethical dilemma.

“On the one hand, the doctor does not want to lie to his patient. On the other hand, the effect of the fake treatment would diminish if the patient knows it is fake. For this reason, fake treatments are typically left to practitioners of so-called alternative medicine who are often not even aware of the ethical dilemma,” he writes in the journal Medical Hypotheses.

However he believes this is not the case as telling the truth about the dummy treatment would not stop it from being effective. This type of treatment is called the ‘meta-placebo’ effect.

“This is based on the healing belief that even fake/placebo treatments have positive effects. That is, if both the doctor and the patient believe in the healing powers of the fake treatment, it does not matter that both know the treatment is fake,” he says.

If such an effect does exist, it would solve a few complexities for today’s medics. They would not have to lie to patients when prescribing them placebos and by having such treatments at their disposal they could continue to regularly monitor patients’ symptoms whilst on the “treatment”. The doctor could also help to prevent people from using alternative medicine, which can be both expensive and risky to health.

The hypothesis that the “meta-placebo” effect exists needs to be tested before such treatments can become evidence-based medicine.

Using the equivalent to the gold standard of the double blind trial would create a challenge for such research as would the dilemma over which condition to test it on, he says, but he calls on readers to help meet those challenges in testing the effect.

The article follows figures published by the Prescription Pricing Authority last month that show a fall in the prescribing of homeopathic remedies by GPs from 83,000 in 2005 to 49,300 in 2007.

However separately, a pilot study from five NHS homeopathic hospitals found 60% of the 1797 patients treated with homeopathic remedies reported an improvement in quality of life.

The top four most treated conditions were eczema, chronic fatigue syndrome, menopause and osteoarthritis. Amongst those four, the proportion of patients that reported an improvement in quality of life after six visits to the homeopath varied from 59.3% for chronic fatigue syndrome and 73.3% for menopause. Overall, 30 common conditions were being treated by homeopaths.

What a difference a mention in the NY Times makes! There’s been an incredible amount of web traffic generated by a website advertising ‘Obecalp‘ (‘placebo backwards), including a very lively debate at one of our favourite sites, Boingboing

In the Boingboing exchanges, most people are objecting to (a) enculturating kids into pill-popping behaviours, and (b) deceiving kids about the actual nature of the pill. Nobody’s gainsaying the operation of the so-called placebo effect, it seems to be more about the parenting issues …

I guess the same objections would be raised to behaviour like putting a Flintstones-themed band-aid on a bumped knee that didn’t actually need a band-aid, with the assurance that this would ‘make it better’…?

Two things, in defence of the placebo-as-pill approach (and astute readers will be aware that the placebo effect can also be engaged through sham injections, sham surgery … and possibly Mystical Words Uttered Backwards Under a Full Moon and so forth …

As conscious purveyors of placebos, we’re concerned with the potential of the placebo effect to inspire self-healing. We don’t recommend that people lie about or misrepresent our product: it’s a sugar pill, inert, side-effect free … BUT the placebo effect exists, and there is some evidence to show that people ingesting a placebo *in the awareness that it’s a placebo* may still gain some benefit. That’s the ‘honesty in parenting’ bit.

As to the pill-popping-culture bit, well … perhaps. One of our team is a homeopath, and consequently aware of the materialist critique that homeopathic remedies are also nothing else but placebos. In general, our feeling is ‘so what? If there’s no deception and misrepresentation, and the things actually work, what’s the harm?’

We understand the passion and the aggro, to an extent. Nobody likes the idea of ripping people off and leveraging the pain of children. But we can assure you there’s a case to be made for harmless and light-hearted exploration of the placebo effect, and especially for the questions it raises about the same pill-popping culture that encourages conventional practitioners to regularly use ineffective treatments (such as prescribing antibiotics for viral infections).

In 2005, global pharmaceutical sales totalled US$602 billion with growth of 7% from the previous year.
At an average annual growth rate of 14% between 1994 and 2003, pharmaceuticals top the OECD manufacturing trade growth stats, ahead of coke, refined petroleum products and nuclear fuel (8%), medical, precision and optical equipment (7.5%), aircraft and spacecraft (7.4%), and motor vehicles, trailers and semi-trailers (7.3%).
In 2006 the 10 largest pharmaceuticals firms accounted for 46 per cent of global sales.

Want to know where we get the ‘up to 70% success’ claim in our packaging?

"The placebo response, noted as an early or nonpersistent improvement in response to an inactive agent, represents one of the most significant challenges in central nervous system (CNS) drug development. Despite a wealth of documentation, there is no commonly accepted definition of this phenomenon. However, it is agreed that there has been a significant increase in the placebo response in the last 20 years, particularly in clinical trials with antidepressant medications for major depressive disorder (MDD).

Estimates as high as 70% have been reported for CNS clinical trials. (our italics) Such large placebo rates have a significant impact on the cost and speed of drug development.

Since fewer than half of the depressed patients who receive active medications in psychiatric trials show clinically significant improvement, some critics claim that antidepressants are no better than placebo treatment, and their illusory superiority depends on poorly designed studies and biased clinical evaluations. In a set of six identically designed, three-arm, parallel controlled trials submitted to the Food and Drug Administration for an antidepressant drug, Leber reported that antidepressants could not be distinguished from placebo in five of the six studies."

Gorgeous placebo satire from the estimable Onion. For the full story, go here. 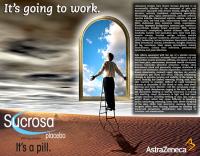