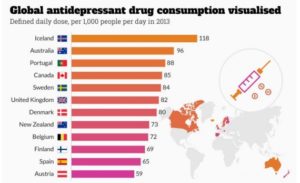 It’s bad news if you’re Icelandic or Australian. Over at I Fucking Love Science they point out that “the report only covered the pharmaceutical habits of “developed countries.” Also, the United States – the original “Prozac Nation” – did not feature in this particular set of data. Separate data has shown 10% of Americans are prescribed antidepressants, which would put them second on this graph. We should also note that this is per thousand people, not by the total number consumed.”