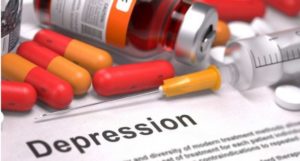 “Antidepressants are supposed to work by fixing a chemical imbalance, specifically, a lack of serotonin in the brain. Indeed, their supposed effectiveness is the primary evidence for the chemical imbalance theory. But analyses of the published data and the unpublished data that were hidden by drug companies reveals that most (if not all) of the benefits are due to the placebo effect. Some antidepressants increase serotonin levels, some decrease it, and some have no effect at all on serotonin. Nevertheless, they all show the same therapeutic benefit. Even the small statistical difference between antidepressants and placebos may be an enhanced placebo effect, due to the fact that most patients and doctors in clinical trials successfully break blind. The serotonin theory is as close as any theory in the history of science to having been proved wrong. Instead of curing depression, popular antidepressants may induce a biological vulnerability making people more likely to become depressed in the future.”

More on the continuing critique of widespread prescription of antidepressants here.